I grabbed this slim volume on a lark – the first book of oft-anthologized dark scribe Lydian Faust – and was richly rewarded by a surreal, psychological, lightning-swift read that has (almost) everything that a good horror story needs, and nothing it doesn’t. The story first draws us into the uneasy interactions between Luna, a mental patient who may or may not be something other than human, and her psychiatrist, Dr. Alisha Sizemore, whose methods and motives are deeply questionable…all the more so once we meet some of her other patients. 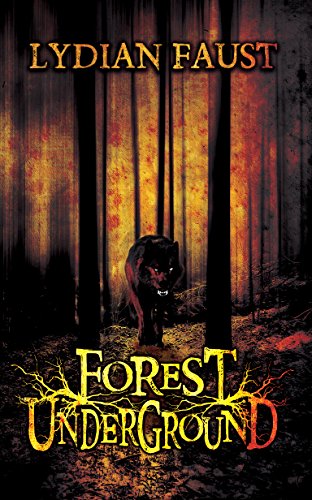 The first half of the book is primarily built around the tangled mystery of Luna’s mind and memories, of growing up as…well, a woods-bound homeschooled kid with an unusually dysfunctional family. Other reviewers have made much of Faust’s use of the “subverted/dark fairytale” trope (specifically “Little Red Riding Hood”), but Faust uses this as more of a jumping-off point than anything else, into a much larger, distinctively vivid hidden world, of which we see only the most evocatively unsettling glance. If so inclined, Faust could easily make this the first scant step into a larger mythos of her own invention, reminiscent of the best of Caitlin R. Kiernan…particularly in the menacing, elusive nature of the titular forest and its denizens.  To go into further detail would be to spoil some of the book’s juiciest surprises. The latter portions of the story deal in Alisha’s traumatic youth, first with her narcissistic mother, then the horrific bullying she endures at an elite boarding school, where the haunted dorm room down the hall is the least of her worries. While both Luna and Alisha’s stories are filled with shadowy things that go bump in the night, it’s in the unflinching depictions of all-too-believable human cruelty and the resulting trauma, where Faust truly makes the reader wince and cringe.

The central dramatic tension is anchored in the subtle, slow-burn back-and-forth between Luna and Alisha, neither of whom are wholly reliable narrators. The question isn’t so much “Who should I be rooting for?” as “Who should I be more worried for?” Initially, it’s very much Luna who elicits our sympathies, a troubled young woman who’s come to a bad state, at the shadowy mercy of an icy, ruthless professional*. Whatever’s up with Alisha, though, her own growing unease becomes equally relatable, as Luna reveals not only her unexpected lucidity, but that she may well be holding more of the cards than she first appeared. Faust understands the importance of atmosphere in situations like this, of the relationship between surroundings and human behavior. She’s a natural at painting the echoing, haunting surroundings of Alisha’s maybe-not-quite-what-it-seems psychiatric facility and Luna’s childhood haunted forest in equal measure, often in just a few sentences, where many accomplished writers would require whole paragraphs.

It’s only in the climax where the telling of the tale somewhat falls apart. For one thing, at a pivotal moment, one supporting character’s on-the-job behavior goes zero-to-sixty gung-ho, in a previously unhinted manner, so it feels like Faust was trying to pile one more layer of tension and danger onto the scene than was necessary, at the expense of credibility. And while the big-twist reveal remains shrouded in a certain amount of intentional ambiguity, it feels lacking in thought-out, internal cohesion, in a way that doesn’t do justice to the tale leading up to it. Also, of the two main characters and their intersecting journeys, I felt far less satisfied by the connective tissue of one than the other, between where she begins and where she ends up. Right as this came dangerously close to leaving a sour taste in my mouth, though, Faust hit me with a denouement that’s at once out-of-left-field yet utterly fitting, in a way that left me both satisfied and thirsty for more. I’ll be keeping an eye out for more of this storyteller’s juicy, vivid, haunting tales.

Lydian Faust is a writer of horror and dark fiction. She is also a painter who likes to lay it on thick. Ms. Faust lives in one of the murder capitals of the United States of America. Her hobbies include nachos and alien conspiracy theories. You can find her at www.lydianfaust.com, on Facebook at www.facebook.com/lydianfaust, and on Twitter @LydianFaust.

Forest Underground is now available on Amazon in e-book and paperback.