One of the perks in breaking into the small press/indie speculative fiction scene is digging ever deeper into this new, ever growing and evolving underground scene of weird, wild new voices. After having the honor of being part of B&B’s first two issues, my newfound addiction has been catching up on the magazine’s subsequent issues and the authors therein, along with several other fine small-press magazines I hope to review soon. While the first two issues featured many enjoyable tales (hi, folks), here editors Cameron Mount and Matthew Gomez significantly ups the ante with multiple shots of the hard stuff, without a timid or indifferent entry in sight. 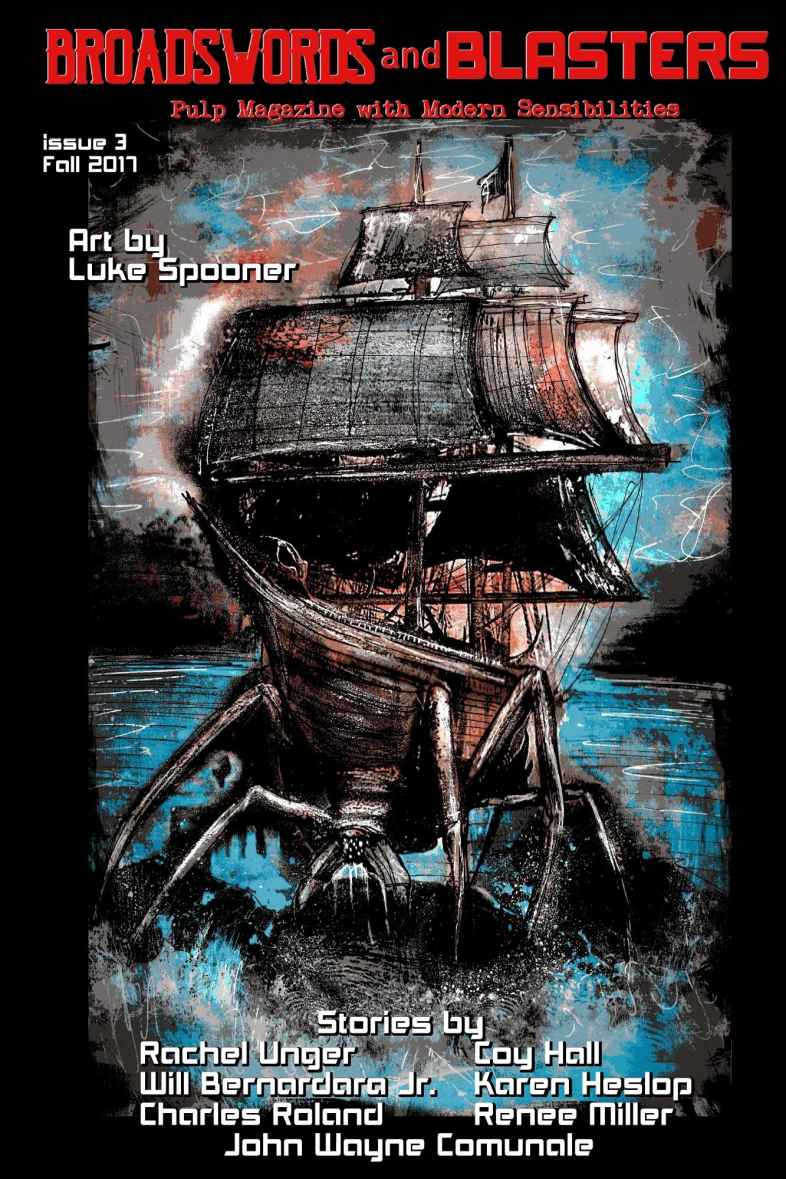 Gold, Skin, and Time by Renee Miller: Right off the bat, this volume shows it’s not messing around, by kicking the door in with this rattling Weird Western. Already an accomplished horror author, Miller immediately makes us feel right at home (while certainly not safe), opening from the point of view of a long-suffering, bullied innkeeper of a frontier town. Things quickly swerve from ruggedly dangerous to downright nightmarish, and don’t let up from there. While I was initially put off by Miller’s explanation of the strange goings-on, she brings it all together with a final twist that’s both mind-bending and sobering.

Watercolor Blue by Charles Roland: A crime-noir tale, of a smalltime thief getting in over his head with some much, much worse people. This one reads like it would be right at home in the original Black Mask magazine. Shades of both Raymond Chandler and Cornell Woolrich abound. If I have one complaint, it’s that I’d have liked more specificity in the villains, with a slightly more distinctive sense of time and place…though it’s hard to stay irritated, given the tale’s vice-grip pacing and escalating stakes.

Moss by Will Bernardara Jr.: Here’s where things start to get really out there, with a crew of cursed pirates, stuck in the festering loop of a hell of their own making. If you ever wondered what the point of view of an undead or mutated crewman from one of the Pirates of the Caribbean flicks might be like with a hard-R injection of splatterpunk body-horror, where you can smell the otherworldly putrescence of the ship, the crew, and their abominable master…this tale might make you sorry you asked, but you’ll keep turning the pages ’til the end anyway.

Zero Days Since Last Accident by Rachel Ungar: This story begins like a seemingly routine space-pirates story, which feels strongly influenced by the show Firefly. Then before you know it, you find yourself locked in a frenzied, sustained, escalating chase, which speeds towards its natural conclusion like the ground rushing up to meet you.

Testing Limits by Karen Heslop: A look behind the scenes of the video game industry in a cyberpunk world. As with anything where virtual reality is involved, the paranoia of questioning the nature of one’s reality quickly comes onto the table…but Heslop isn’t content to stick with that, with some delightful genre-bending surprises that are best left for the reader’s discovery. While I wouldn’t call this tale lighthearted, it’s certainly the most…optimistic story herein, with streaks of whimsy and idealism, which are a welcome relief from the cumulative grim intensity of the others.

Valero Serves a Hungry Grave by Coy Hall: The issue closes out with yet another Western, as strong as the first, though quite different in method of attack. Hall crafts a loving homage to ’60’s and ’70’s Spaghetti B-Westerns such as the Sartana series, employing a non-linear structure, the true motive and impact of which doesn’t become clear until the final page. Where he particularly shines, where most modern hardboiled writers of whatever stripe fall short, is how he digs into the psychology of his violent antihero, along with those of his enemies and tenuous allies, in ways that rings true. While this tale stands on its own just fine, it also introduces a vivid, distinctive figure in Valero, of whom I wouldn’t mind reading more.